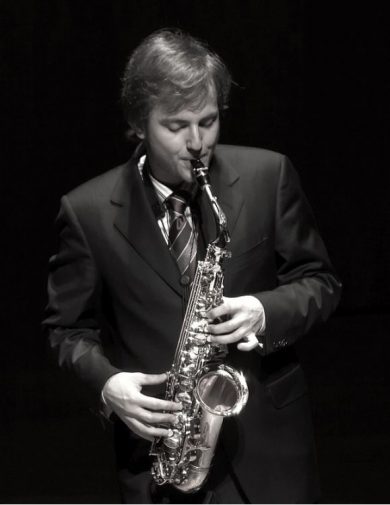 Described as ‘’The best saxophonist of today’s younger generation’’, Miha Rogina is accredited for his innovative interpretations of musical works. He has won the first prize at no fewer than 10 international competitions. He has worked with today’s leading musicians including Pierre Boulez and Fabio Luisi and has appeared at major concert stages throughout Europe, Asia, USA and Africa such as the Musikverein in Vienna, Salle Pleyel in Paris, Großes Festspielhaus in Salzburg and Izumi Hall in Japan.
He initially studied at Ljubljana Music University with Matjaž Drevenšek, and continued his studies at the prestigious CNSM de Paris with Claude Delangle, where he graduated with the highest honours, and at the renowned Eastman School of Music in the USA. In 2015 he graduated orchestral conducting from the Universität für Musik und Darstellende Kunst in Vienna and in 2019 he graduated choral conducting from the same university.
As a soloist he performed with a number of orchestras worldwide including the Vienna Symphony Orchestra, Thailand Philharmonic orchestra, Hoffer, Bruges, Slovenia, Maribor and Paris Laureates Symphony Orchestras and others. An active chamber musician, he performs frequently with concert pianist Sae Lee as the Duo Kalypso.
Rogina is associate professor at Ljubljana University and a guest lecturer at Senzoku Gakuen College of Music, Osaka College of Music. Since 2017 he has been a guest lecturer at the Osaka College of Music and Sibelius Academy in Helsinki. He gives masterclasses across Japan, UK, Latvia, Poland, Finland, Germany and Austria, and is a member of jury at national and international saxophone competitions.
As a conductor he has led orchestras such as Slovenian Philharmonic Orchestra, RTV Slovenia Symphony Orchestra, Slovene national theatre Symphony Orchestra, Bratislava Philharmonic Orchestra, Pro-Arte Symphony Orchestra and more.