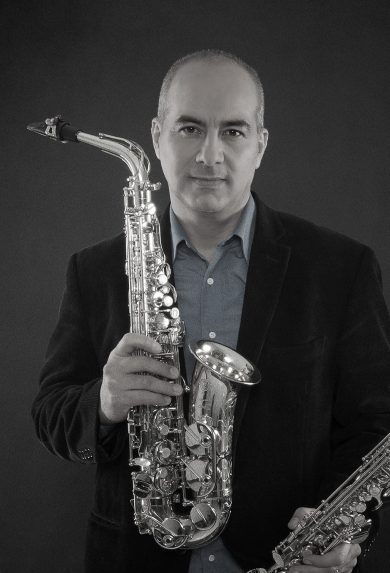 Dr. Javier Valerio, widely recognized as one of the pioneers and leading classical saxophonist in Latin America, is an exhaustive advocate of the Latin American classical saxophone repertoire and the current President of the Latin American Saxophone Alliance.
After studying with the world renowned saxophonist Eugene Rousseau at Indiana University School of Music, Valerio returned to his home country, Costa Rica and established the Saxophone Studio teaching as a Distinguished Professor at The University of Costa Rica.
He is the founder and Director of the Sax Fest Costa Rica International, the Costa Rica International Saxophone Competition and the renowned saxophone and percussion quintet, SONSAX.
Valerio obtained his Master degree in Jazz Studies at the Florida International University, where he was later a professor of the classical saxophone. He was also a professor at the New World School of the Arts in Miami, and is a member of the Florida Saxophone Quartet. He obtained his DMA degree from the University of Kansas, as part of the KU-UCR partnership initiated in 1958.
As a soloist, Valerio has played with many orchestras and ensembles around the world, and he has performed in numerous occasions at the Montreal International Jazz Festival, World Saxophone Congresses and Latin American Saxophone Alliance Congresses. He was a member of the world known Adolphe Saxophone International Competition Jury in 2014 and has also been invited as a jury member in many other saxophone international competitions.
Valerio has played concerts and given masterclasses all around the world: in Russia, Croatia, Japan, Hong Kong, Singapore, Canada, United States, México, Colombia, Chile, Uruguay, Argentina, Bolivia, Brazil, Chile, Ecuador, Peru, Paraguay, France, Belgium, Switzerland, Germany, Scotland, Dominican Republic, Puerto Rico, Central America and Panama.